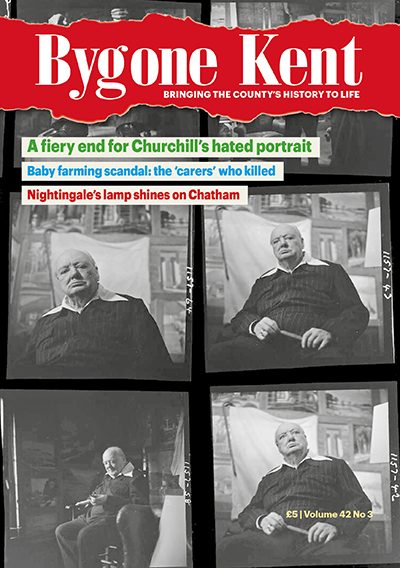 Fiery fate of the portrait Churchill loathed: the wartime prime minister thought it made him look like a halfwit seated on the lavatory. We reveal where and how it was destroyed. By Mike Gunnill

A century of civilisation on the shelf. Kent's library service is marking its 100 years in a pandemic, which mirrors its birth during the Spanish flu outbreak. By Christoph Bull

Not all babies had Oliver’s happy ending: ‘Farmed’ infants were often neglected. Frequently they died – sometimes murdered. By Andrew Rootes

Hitler’s bombs of revenge: the Baedeker raids were payback for the allied attacks on German’s cultural cities. Book review by Andrew Rootes

Florence’s lamplight shines on Chatham: the nursing pioneer was so impressed with Fort Pitt hospital that she backed first army medical school there. By Irina Fridman

Time to give him a hero’s burial: a Battle of Britain pilot crashed after a dogfight over Kent. His body lies under what is now a development site. By Mike Gunnill

Lost on the marshes: the ever-evolving landscape on the southwestern corner of Kent has created new communities – and destroyed them. By Neil Holman