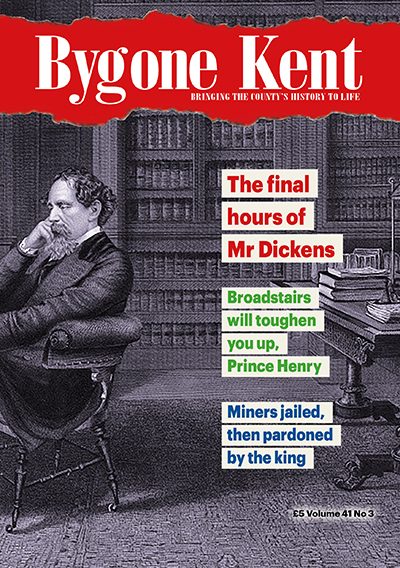 The final hours of Mr Dickens. A century and a half ago, the man whose words had so entranced the world uttered his last at #Higham. Our Dickens expert, Andrew Rootes, reports

The seaside will make a man of you, Prince Henry! The royal tutor made a revolutionary suggestion: perhaps the king’s ailing son should go to a school, just like other boys. By Mike Gunnill

Murders, Minster miracles and myth: The foundation of an abbey that still flourishes on the Isle of Thanet is based on the legend of a remarkable deer. By Margaret Bolton

‘Where the turtledoves call from the willow wood and the wide sunny meadows where the sheep browse all day’: How the River Medway inspired writers. By Neil Holman and Keira Soames

Stuffy, awkward, and heavy: here’s the 18:08 double-decker A revolutionary train but rather strange train that ran in Kent,. By Dana Wiffen

First they are jailed, and then miners’ strike leaders win a king’s pardon: the Kent coalfield became embroiled in the Second World War’s most bitter industrial dispute. By Peter Willaims