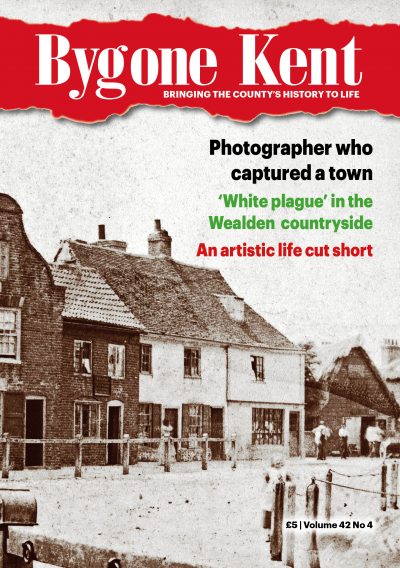 A cure in the countryside: Deep in the Weald is a vast hospital that was built to treat workers suffering from the ‘white plague’, tuberculosis. By Andrew Rootes

The man who captured Sandwich: Photographer William Boyer spent his life recording the history of a town. It was only by chance that his work was preserved. By Mike Gunnill

Xavier, the rail guard who beat the colour bar: A Caribbean man among the thousands asked to help post-war Britain was denied promotion because he was black. By Irina Fridman

A life of art cut short by car: Denton Welch, born in Shanghai, loved Kent and captured some of its glory in surreal style. If only he had had more time. By Neil Holman

The tale of two houses: After a successful military career, John Montresor retired to Belmont. His past, however, pursued him into disgrace, forcing his widow to move to a much humbler home. By Christine Rayner

Engineering was a man’s world. Then came Verena: The Ashford-born inventor blazed a trail for women in the industry and now a university centre has been named in her honour. By Andrew Rootes

Maths wizard made merlin magic: A Sheppey boy gave the Spitfire the extra power that helped Allies to win the Battle of Britain. By Crispin Whiting