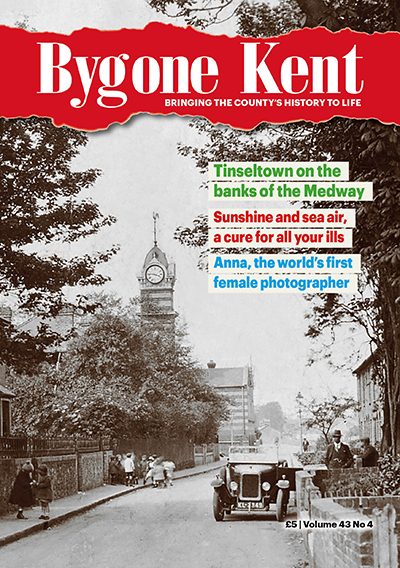 Sunshine and sea air, the cure for your ills: former patient tells his story of a pioneering hospital on the coast that went far past treating ‘the King’s Evil’. By Paul Tritton

The screams were horrible: a warship off Folkestone made a slight course adjustment and 300 died. By Andrew Rootes

Arsenal ‘city’ still keeps its secrets: huge arms factory thrived where there is now a Thames-side town. By Mary Mills

Lights, action … Snodland: Chinese acrobat who was feted by Hitler dreamt of running his own film studio on the banks of the Medway. By Chris de Coulon Berthoud

One man’s great war, hidden in a steel box: an archive of life at garrison has been repatriated to Folkestone, with a little diplomatic help. By Christine Rayner

‘Beware making your master sick on strawberries and cream’: a 16th-century training manual. By Helen Wicker