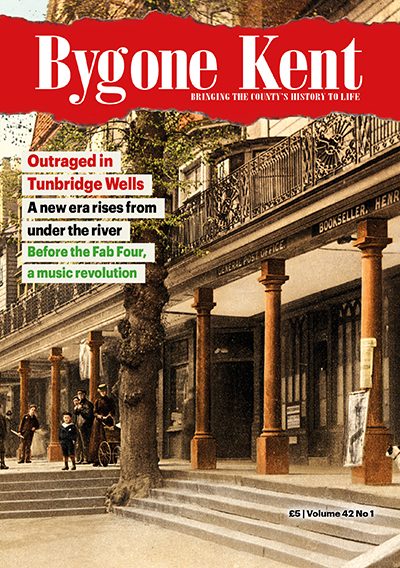 A new era rises from under the Thames: The ‘great tunnel’ was a long time coming. It was first suggested in 1798 but many attempts failed. The rise of motor traffic finally prompted action. By Andrew Rootes

Death at the pump: In one village to the west of the county, great efforts were made to improve the quality of water. Tragically, they were not successful. By Mary Mills

Why, oh why, is everything so disgusting in this town? Before the bear pit that is social media, there was another way to vent your spleen in outraged town. By Nigel Cawthorne

Adventures in deepest: Africa He met Livingstone, Stanley and Rhodes and his life became a Hollywood movie. He came home for his last days on the Kent coast. By Mike Gunnill

Sometimes I sped along at 7mph: Charles Hooker, born in 1884, had a tough life aboard traction engines and steam lorries. Newly discovered papers describe some of his adventures at the turn of last century. By Roger Rogowski

Before the Fab Four came the ... Kent beat boom: Inspired by skiffle and American rock ‘n’ roll, young men took up their guitars in the first wave of the Sixties global revolution. By Allen Whitnell